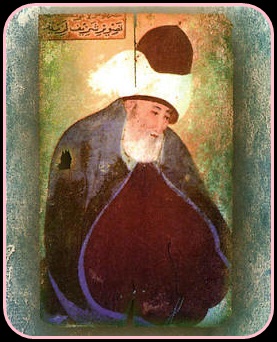 He was in no other place

Resolutely I went to summit of the fabulous mountain of Ka’af. There was only the dwelling of the Anqa bird.I went to Kaaba at Mecca. He was not there. I asked him from Avicenna the philosopher. He was beyond the range of Avicenna, I looked into my own heart. In that place I saw him. He was in no other place.

The hidden worlds has its own clouds and rains, but in a different form. Its skies and sunshine are of a different kind.

This is apparent only to a selected few who are the refined ones. Those who cannot be deceived by the seemingly completeness of the ordinary world.

One grows to be hallow, the other becomes a sugar cane.

Do not look at the exterior form

But see what is in my hand.

The Sleep and the Forgetting

One who has lived many years in a city goes to sleep.

To wake in a city full of good and evil; his own cities disappears from hid mind.

He does not say to himself, “This is a new city, I am a stranger”.Nor does he think that he have lived in this new city forever and was
born and brought up here.

Ever wonder, that the soul does not remember her ancient abode or the place of birth.

Since she is wrapped in the sleep of the world, just like a star engulfed by clouds.

Though the trodden soul goes through many cities, the dust upon of her vision is yet to be swept away.

What shall I be?

I died from minerality and become vegetable

And from vegetative-ness I died and become animal

I died from animality and became man

Then why fear disappearance through death?

For the next time I shall die

After that soaring higher than angels

What you cannot imagine I shall be that.

If anyone tells the embryo in the womb, “Out side there is a world well-ordered,

A pleasant earth, broad and long, wherein are a thousand delights and many things to eat;

A sky very lofty and full of light, sunshine and moonbeams and innumerable stars.

It wonders are beyond description: why do you stay, drinking blood, in the dungeon of filth and pain.?”

The embryo, being what it is, would tell of a world without scent and hue.

None of the vulgar hearkens to them; sensual desire is a barrier huge and hue.

Even as the embryo’s craving for the blood that nourishes it in its low abodes.

Debarred it from the perception of the external world, since it knows no food but blood.

The Man of God

O’ my Heart! Until, in this prison of deception
You se from difference between This and That.
For an instance, get detached from the well of tyranny.
And stand outside.

The Inner Being
Exalted truth imposed upon us.
Heat and Cold, Grief and Pain.
Terror and weakness of wealth and body.
Together, so that the coin of our inner most being.
Becomes evident

Those who know cannot tell
Whenever the secrets of perception are taught to anyone
His lips are sewn against speaking of the consciousness.

Intelligence Vs. Truth
Intelligence is the shadow of the objective Truth
How can the shadow contend with the sunshine?
True Reality The science of Truth disappears in Sufi’s Knowledge.
When will mankind understand this saying?

Other whose Grace informs the witless clod.
Whose wrath makes blind the heart and eye within
My praises dispraises Thee, Almighty God
For praise is being and to be is sin.

The name of everything with us is in its outward form, however the real names, of inward essence, are with their Creator.
In the eyes of Moses, the name of his rod was “staff’; in the eyes of God its name was “dragon”
Only before God that is our end lies our real names.

The purpose of creation

Divine wisdom created the world in order that all things in His Knowledge should be revealed.

The Prophet (Muhammad S.A.W) said,” This world is nothing but a moment”. Every instance the world is dying and returning. Every instance it is being renewed, but we are unaware of it perpetual change.

The Movement of the World

The world is frozen in its nature. Wait till the rising of the sun of resurrection.
Only then we would be able to see the movement of the World’s body.

The Mystery of Evil

Both Moses and Pharaoh were worshipers of the Truth, though the former found the way, while the other lost it.
In daytime Moses cried before God, but then even Pharaoh moaned before God. But by His decree made Moses to be illuminated and the same decree made the Pharaoh the darkened one.