Discourse on Intoxication and Sobriety: By Hazrat Ali Hajvairi

Discourse on Intoxication and Sobriety: Hazrat Ali Hajvairi [Daata Sahib of Lahore] explaining both schools in Sufism in Kashful Majoob

You must know that “intoxication” and “rapture” are terms used by spiritualists to denote the rapture of love for God, while the term “sobriety” expresses the attainment of that which is desired.

Some place the former above the latter, and some hold the latter to be superior.

Hazrat Bayazazid Bistami RA and his followers prefer intoxication to sobriety. They say that sobriety involves the fixity and equilibrium of human attributes, which are the greatest veil between God and Man, whereas intoxication involves the destruction of human attributes, like foresight and choice, and the annihilation of a man’s self-control in God, so that only those faculties survive in him that do not belong to the human genus; and they are the most complete and perfect.

How great is the difference between these two men! The attribution of a man’s act to God is better than the attribution of God’s act to a man, for in thc latter case the man stands by himself, while in the former casc he stands through God.

Hazrat Junayd Baghdadi and his followers prefer sobriety to intoxication. They say that intoxication is evil, because it involves thc disturbance of one’s normal state and loss of sanity and self-control; and inasmuch as the principle of all things is sought either by way of annihilation or subsistence, or of effacement or affirmation, the principle of verification cannot be attained unless the seeker is sane.

Blindness will never release anyone from the bondage and corruption of phenomena. The fact that people remain in phenomena and forget God is due to their not seeing things as they really are; for if they saw, they would escape.. Seeing is of two kinds: he who looks at anything sees it either with the eye of subsistence (baqa) or with the eye of annihilation (fana).

In either case he turns away from created things. On this account the Apostle said in his prayer: “0 God, show us things as they are,” because whoever thus sees them finds rest. Now, such vision cannot be properly attained except in the state of sobriety, and the intoxicated have no knowledge thereof.

For example, Moses was intoxicated; he could not endure the manifestation of one epiphany, but fell in a swoon (Qur.vii,139): but our Apostle was sober; he beheld the same glory continuously, with ever-increasing consciousness, all the way from Makkah, until he stood at the space of two bow-lengths from the Divine presence.

My Shaykh, who followed the doctrine of Junayd, used to say that intoxication is the playground of children, but sobriety is the deathfie[d of men.

I say, in agreement with my Shaykh, that the perfection of the state of the intoxicated man is sobriety. The lowest stage in sobriety consists in regarding the powerlessness of humanity: therefore, a sobriety that appears to be evil is better than an intoxication that is really evil.

It is related that Abu ‘Uthman Maghribi, in the earlier part of his life, passed twenty years in retirement, living in deserts where he never heard the sound of a human voice, until his frame was wasted and his eyes became as small as the eye of a sack-needle. After twenty years he was commanded to associate with mankind. He resolved to begin with the people of God who dwelt beside His Temple, since by doing so he would gain a greater blessing.

The Shaykhs of Makkah were aware of his coming and went forth to meet him. Finding him so changed that he hardly seemed to be a human creature, they said to him: “O’ Abu ‘Uthman, tell us why you went and what you saw and what you gained and wherefore you have come back.” 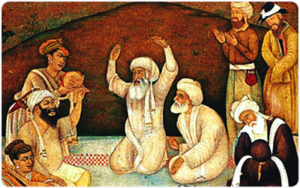 Intoxication, then, is to fancy one’s self annihilated while the attributes really subsist; and this is a veil. Sobriety, on the other hand, is the vision of subsistence while the attributes are annihilated; and this is actual revelation. It is absurd for anyone to suppose that intoxication is nearer to annihilation than sobriety is, for intoxication is a quality that exceeds sobriety, and so long as a man’s attributes tend to increase he is without knowledge; but when he begins to diminish them, seekers (of God) have some hope of him.