When speaking of Mevlana Rumi, I cannot think of a better tribute paid by Allama Iqbal in Bal-e-Jibreel (The Wings of Gabriel) to his spiritual master.

A LETTER FROM EUROPE

Our senses limited, we do not venture beyond the seashores

But Rumi is an vast Oceon, Stormy and full of mysteries.

Iqbal! You, too, are moving

In that band of men–

That band of men of passion,

Of which Rumi is the guide,

Is the guiding light for freedom;

Has he, indeed, a message,

For the age we live in?

He dies who eats hay and corn,

He who eats God’s light, becomes the Quran.’

Below is my account of the pilgrimage to the shine of Mevlana Rumi (known as Mevlana Rumi Museum) in Konya . The only reason to share is because it may be useful for anyone who wishes to pay a visit to the greatest mystic since such sacred site is less traveled by South Asians. The Turkish word Mevlana is a derivation from Arabic/Persian Maulana, which means ‘our master’. 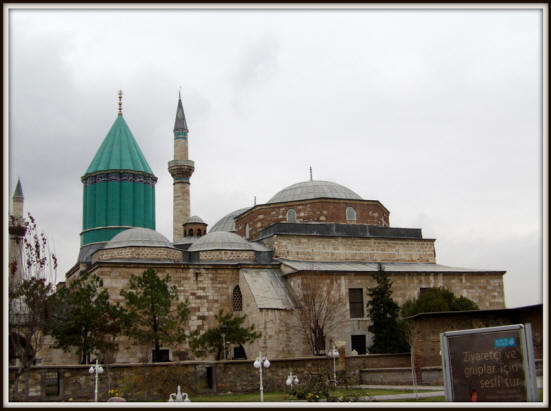 Mevlana Rumi’s Urs takes place on 17th December every year in Konya, which is key event for this beautiful small city. The word Urs is a derivation from the Persian word Uroos, which means a Bride. Urs is celebrated on the day saints or sufis passed away to unite with their Lord, thus calling it the night of wedding or companionship. Qazi Sajaad Hussain, who translated Masnavi in Urdu, writes in book’s prelude that when Mevlana Rumi’s last moments arrived, a Hakim arrived for prognosis. The Hakim wept after seeing Mevlana’s condition as he realised there is nothing he can do. Mevlana asked him not to weep and remarked, “Can’t you see that there is only thin veil left behind between the Khaliq (The Creator) and Maklooq (The Creation) now?”.

I took the journey in December so it coincides with Urs time. In terms of logistics, I took the Meram Express from HyderPasha train station, Istanbul to Konya. You can book advance tickets on the http://www.tcdd.gov.tr/anasayfa, however it can be quite confusing. It is almost a 14 hour overnight journey. Meram Express is a modern and clean train and as equally good as trains we use in the West.

There are 2 main option for tickets: Pullman which is basically a seat that reclines or a Sleeper which is a private room which two beds, personal sink, fridge with snacks and savouries. There are some useful photos available here on seat61 website. I purchased a Pullman ticket option from Istanbul to Konya which cost Turkish Lira (TL) 28 (= GBP 11) and returned to Istanbul by single sleeper for TL 78 (equivalent to approx GBP 31). I would recommend the sleeper despite being a little expensive as it is a long journey and can be unconformable on a reclining seat. If you’re travelling on a Pullman, I would suggest bringing blankets and pillow as none are provided. Konya can be quite colder in temperature in winters so warm clothing is a must, see a view from train below. 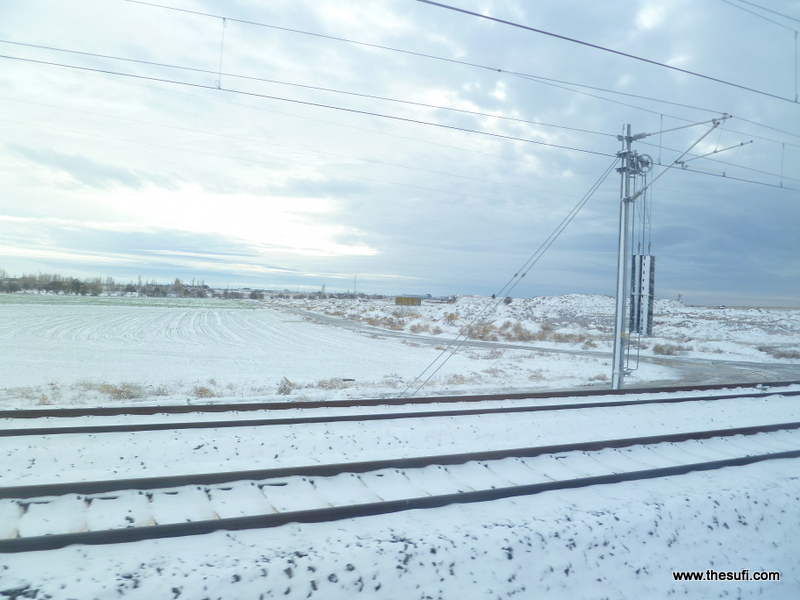 I reached Konya around 8am in the morning. Mevlana Museum is around 3 kilometre but I took a walk to view the city also. A Google map is below to provide direction and it is straight 30 minutes brisk walk. 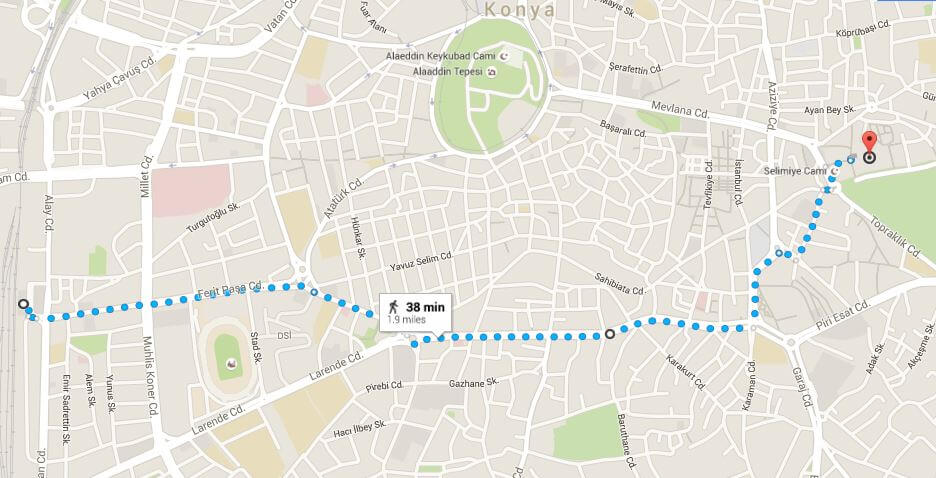 I do suggest to walk into a few shops to buy souvenirs of Konya which include lovely ceramics of whirling dervishes, small cups for Turkish tea, key rings, fridge magnets, vases etc. I found Shopkeepers in Konya very friendly just like Istanbul and be prepared to be asked where you come from, how did you like Konya etc. Shopping in Turkey is more personal than sticking bar-codes to items as in the West and the usual beeps.

Mevlana Rumi Museum is a key tourist site for this small city so expect a little crowd especially during the Urs time. You will  observe tour buses parked outside which provide guided tours to local as well as international tourists. Mevlana Museum is well organised site and you can get literature in English, Spanish, French and other main languages. I took a guide in Turkish (by error!) which is available below to be downloaded in PDF format. 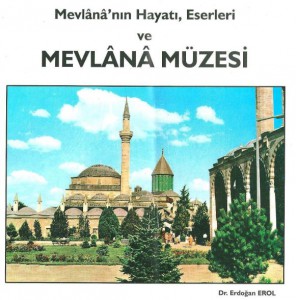 Since photography is prohibited within the shrine area, it provides some good photos of shrine and museum area.

Audio tour guides are a great way to learn since these provide audio commentary for the key highlights of the place by pressing the number associated to it. The garden outside the shrine is called Rose Garden for reason obvious. Konya, like the rest of Turkey, has a large number of species of flora and fauna.

As you enter the gate of the shrine, you will see graves of many personalities with most having a Mevlevi turban [Sikke] on the headstone. One of the striking one is a tombstone of Allama Iqbal (Muhammad Ekbal), which obviously is not the actual final resting place of the great philosoper but an honour granted to Allama for his immense reverence for Mevlana Rumi, see below. 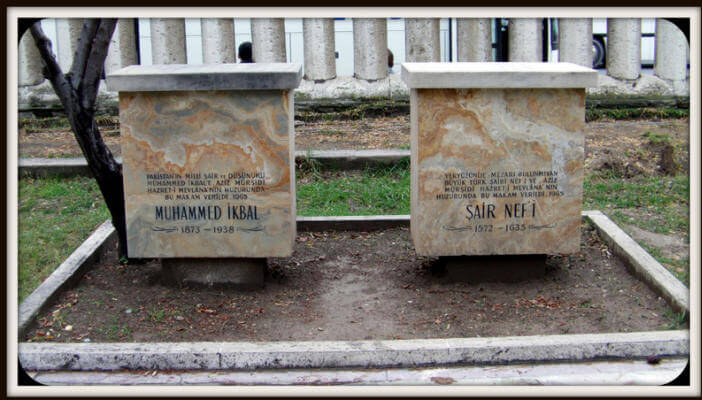 In Javed Naama, Allama provides his advice to his son, Javed Iqbal:

If you do not find the company of an enlightened one (mentor of truth)
Then take from me the knowledge, which I attained from my ancestors
Make Rumi your guide for the (true) path.
So God bless you with ecstasy of love
Rumi knows what is real (fruit) from what is superficial (skin)
His feet are firm in the place of the Friend (God). 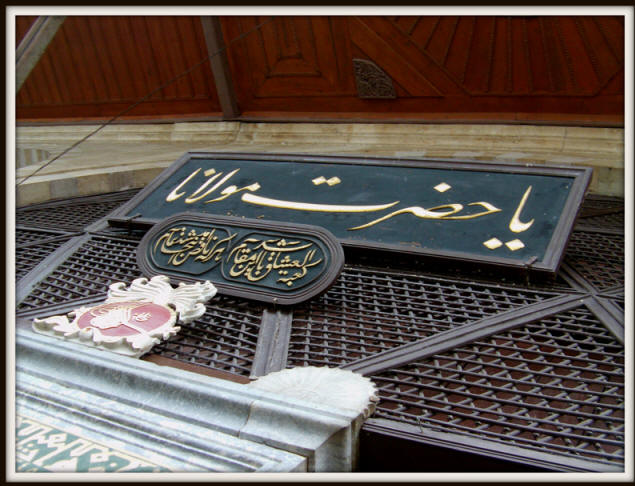 Entrance of Mevlana Rumu’s shrine. At the main shrine door, you will see ‘Ya Hazrat Maulana’ written at the door.

(This is the Ka’aba (mecca) of all Lovers,
It converts an unpure one into a pure one)

Here you will be given polythene shoe covers as you enter the holy shrines hall. Once in the shrine main hall, you will observe many tombs until you reach Mevlana’s tomb which is represented by the largest turban on its headstone, see below. 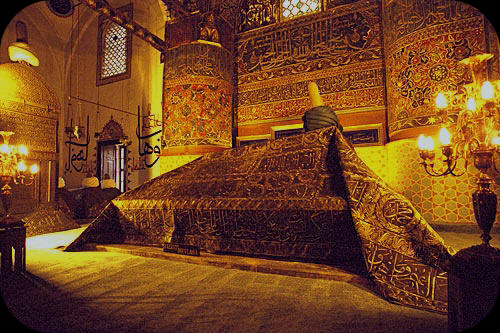 Translation: ‘When we have gone, seek us not in our tomb, but in the heart of wise/enlightened’. 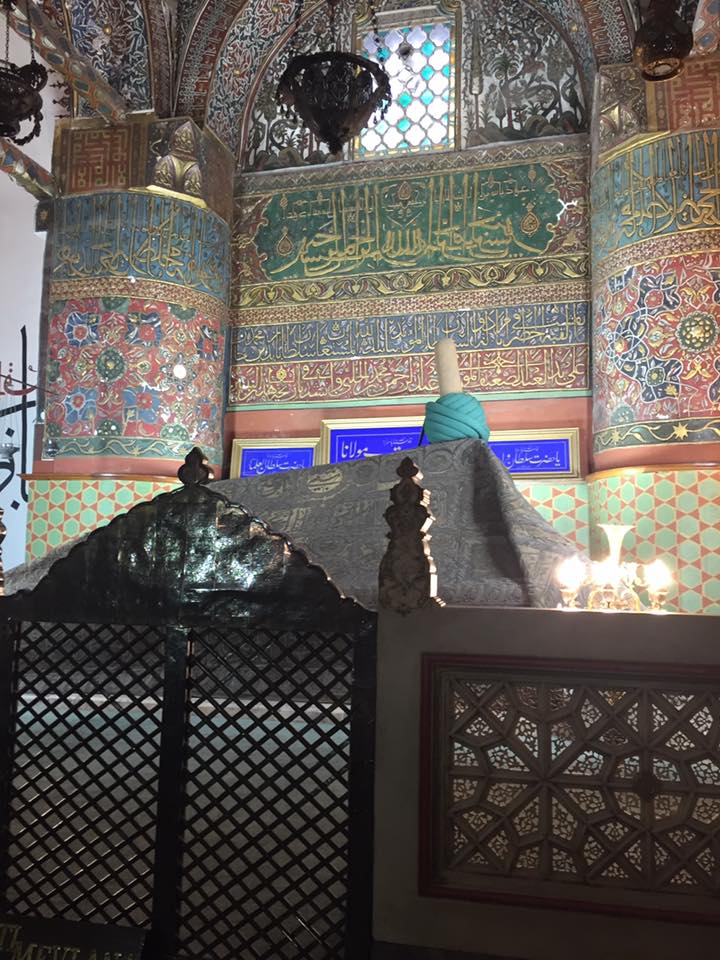 You can offer Fatih and Surah Yasin as you will observe many people doing the same. You will observe people constantly moving in a queue going in both directions which ensures there is constant flow of pilgrims. There is a Mevlana Museum adjacent to the main hall which exhibit texts of Masnavi, musical instruments including Neh and many of Mevlana and other saints personal belonging.

As a part of Ataturk reform for modernisation in 1925, Sufi brotherhoods were not allowed to perform the whirling ceremonies publicly and were practically dissolved. Mevlana’s shrine was converted in Mevlana Museum which opened in 1927.In 1954, a special permission was granted by the Turkish Government lifting the ban on Samaa. The tomb of Rumi is now the primary tourist site of Konya attracting pilgrims all over the world who come to pay their tribute and homage to Mevlana. 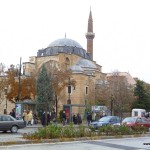 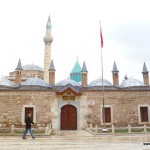 The Mawlawi Whirling Dervishes of Konya have gained popularity and recognition especially in the West with its eye catching ceremonies. Samaa, as the whirling ceremony is called, is a deeply religious ritual, associated with Mevlana Rumi.

There are 7 key stages which have been explained beautifully at http://www.mevlana.org/sema.html.

I retuned back to Istanbul via Meram Express and could not attend the ceremony of whirling dervishes unfortunately which I believe happens in the Rose Garden. I met another pilgrim briefly as I reached HyerPasha station who I recognised immediately from his Mevlana Turban. He visited perhaps all the way from Australia and had intense reverence for Mevlana Rumi. I requested him for blessing and he raised his hands to pray for me. It is a soulful and poignant journey that is taken by admirers of Mevlana globally and it’s is fascinating to be one of them.

I have uploaded a few amateur video on Youtube also, in case they can be helpful.

With request for prayers, if you are fortunate to visit this blessed place soon.