A LETTER for you Nasr-ed-Din Hodja Effendi!” The Mayor’s messenger beamed as he handed a piece of paper to the surprised Hodja.

“A letter? For me?” The Hodja stared at the paper and turned it over and over in his hand. A letter did not come every day in those times when few people knew how to read and write. Luckily, the Hodja was one of the learned ones. He could spell out words and write some of them. “Well, read it!” came from behind the veil Fatima had hastily dropped before her face as the messenger approached. 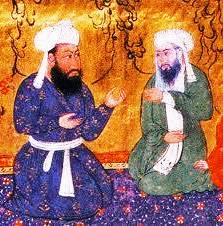 “Yes, read it!” urged the messenger, who had been regretting his lack of education all the time he carried the letter he could not read.

The Hodja cleared his throat pulled himself to his tallest, and read:

“Three travelling priests, very learned men, are visiting in Ak Shehir. They have questions to ask of our wisest men. Will you come to a feast in honor of the priests that they may ask you questions? Come at once.”

Now what could be more fun than a feast and a conversation with learned strangers all on the same day? Not waiting even to brush the dust from his coat, the Hodja saddled his donkey and was off so fast that the messenger trailed behind him.

Arrived at the Mayor’s house, he found that the show of wisdom was to come before the feast. That was well. He might be sleepy after eating, and the three strangers did look most solemn and learned. Their heavy black beards and the fur fringe of their long dark robes showed what distinguished men they were.

He would have to be wide awake to appear as wise as they – wiser if possible.

“So this is the learned Hodja?” And the three priests looked him up and down. He wished he had taken time to put on his better dothes. He might at least have washed his face and straightened his turban.

“I will ask the first question,” intoned one of the priests as he stepped forward and fixed his piercing eyes on Nasr-ed-Din Hodja. “Where – is – the – center – of – the -earth?

With the toe of his shabby shoe, the Hodja pointed to his donkey’s left hind hoof.

“The center of the earth,” said the Hodja, “Is exactly under my donkey’s left hind hoof.”


“How can you be sure of that?” asked the priest, staring at the donkey’s left hind hoof.


“Oh, I just know it,” said the Hodja with a careless shrug of his shoulders. “Of course if you doubt my answer, all you have to do is to measure. If your measuring shows the center of the earth is even an inch away from the place I say, I will know you are a greater scholar than I.”


The visiting priest still stared stupidly at the donkey’s left hind hoof. He shrugged his shoulders and motioned the next priest to take his turn.


“There are as many stars in the heavens above,” said the Hodja slowly, “as there are hairs on my donkey.


“How do you know that?” The stranger was staring at the shaggy coat of the donkey.


“Oh, it’s just one of the things I know,” shrugged the Hodja. “Of course, if you doubt my word, you may count the stars in the sky and count the hairs on my donkey. If there is one star too many or one hair too many, all Ak Shehir will know that you are a much wiser man than I.”

The second priest stared stupidly at the donkey. He shrugged his shoulders and motioned to the third priest that it was his turn. The third priest was the most important-looking of them all. His turban was the biggest. The fur fringe all the way up and down his robe was the heaviest. His beard was the longest. His expression was the
smuggest.

“I have a very simple question for you, Nasr-ed-Din Hodja Effendi,” said he in a voice that made the Hodja fear the question was not going to be so very simple. “How – many -hairs – are – there – in – my – beard?” He stroked his long black beard proudly.

“Oh, that is a simple question,” agreed the Hodja. “There are as many hairs in your beard as there are hairs in my donkey’s tail.”

“How do you know that?” asked the priest as he looked distastefully at the brushy end of the donkey’s tail. He did not in the least fancy having his fine beard compared to that untidy tai

“Oh, it’s just another of those things that I happen to know,” beamed the Hodja who was no longer awed by the solemn travelers. “Of course, you have the right to doubt my word.”
“I do doubt your word!” snapped the priest whose dignity was fast oozing away.

“That’s quite all right,” the Hodja said affably. “It will be simple enough to prove which of us is right and which of us is wrong. For every hair you pull out of my donkey’s tail, I will pull one hair out of your chin. If the donkey’s tail lasts even even one hair after your beard is all plucked out, or if your beard lasts but a single hair after the donkey’s tail is gone you will be proved right and I will be proved wrong. If you are right, you can go from village to village, up and down the land, telling everyone you meet that you are far more learned than the humble Hodja of Ak Shehir.”

Clapping both hands over his cherished beard, the priest drew back into the crowd. And the Hodja wondered how soon the feast would begin

Mullah Nasreddin are many hundreds of years old and in public domain and may be reproduced under creative commons.