Hazrat Syed Ali Hamdani was a saint of great spiritual eminence. He was born at Hamadan in Iran in 1314 AD. In 1373 along with a number of scholars and other followers the saint came to Kashmir. The ruler of Kashmir Sultan Shahabuddin welcomed him and offered him all facilities. The saint established his Khanqah in Srinagar and organised a campaign for the promotion of Islam. It was through the efforts of the saint and his followers that most of the non-Muslims In Kashmir were converted to Islam. The saint died in 1385.

In “Javid Nama in the course of their celestial journey Rumi and Iqbal meet the spirit of Hazrat Syed Ali Hamdani. Rumi introduces the saint Hazrat Ali Hamdani in the following terms:

“The Syed sublime, noble of nobles,
Ghazali himself learned the lesson of ‘God is He’
And drew meditation and thought from his stock,
Guide he of that emerald land,

Counsellor of prince and dervish and sultan;

A king ocean-munificent, to that vale
He gave science, crafts, education, religion,
That man created a miniature Iran With rare and heart-ravishing arts;
With one glance he unravels a hundred knots.”

“How is it that God wants us to do good, and at the same time he created Satan who presents the evil in a beautiful form and tempts us to do evil and disobey God? O saint, tell me, why did God create Satan?”

Hazrat Ali Hamdani replies to the question as follows:

“God has created Satan, so that Man may resist his blandish¬ment, and as a result realise his ‘Self’. If a man falls a victim to the blandishments of Satan he is undone, but he who can wrestle with Satan wins glory. Man is like sword, and Satan is like whetstone. You should strike against Satan with full force, and the harder the stroke the sharper will be your sword. It is thus because of Satan that Man can realise his ‘self’, and rise to perfection.” 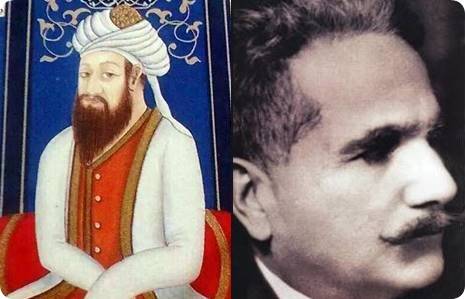 Then Iqbal talks to Hazrat Ali Hamdani about Kashmir and its people. Iqbal says that his soul burns for the people of Kashmir. They are a clever and handsome people. Their dexterity is proverbial. Yet they have lost their selfhood and have become strangers in their own land. Through servitude their aspirations have died, but they were not always like that. At one time they were very valiant, heroic, and ardent in battle.

The mountains of Kashmir are clothed with snow. The chinar trees are red. In the spring time the valley is drenched in colour. Iqbal tells the saint that he happened to visit the beautiful Nishat garden in Srinagar. There he saw a bird perched on a tree which sang that because of the servitude of the people the spring was not worth a penny. Then Iqbal sighs and says that all such servitude is because the British sold the land of Kashmir by the treaty of Amritsar to Gulab Singh for a paltry sum of Rs. fifty lakh. Addressing the wind Iqbal says:

“Zephyr, if you should pass over Geneva Speak a word from me to the League of Nations:
They have sold farmer and cornfield, river and garden,
They have sold a people, and at a price how cheap.”

“My son, I will tell you of a subtle mystery. The body is of clay, and it must perish some time. The soul is an illumination; it is from God, and it will not perish. If you suppress the soul, you die even when you are alive. If your soul is illumined with vision you live even after your death. The people who are in bondage have their souls suppressed. If you want to break these chains, let your soul assert itself.”

The message that the saint gives is ‘Discover your self”. He says:

“Not to discover one’s self is not to exist,
To discover is to bestow the self on the Self.”

Then Iqbal puts another question to the saint. The question posed

“We are poor men, and the ruler demands tribute;
What is the origin of the sanction of throne and crown?”

Shah-i-Hamdan says that the origin of authority Is either the con¬sent of the people or conquest in war. Shah-i-Hamdan praises Iqbal for his stimulating poetry, and gives a message of hope. He says:

“Your cry is a bell urging the caravans;
Why then do you despair of the dwellers of the vale?
Their hearts are not dead in their breasts;
Their embers are not extinguished in the ice;
Wait till you see, without the sound of the Trumpet;
A nation rising out of the dust of the tomb.”

Shah-i-Hamadan assesses Iqbal and his poetry in the following words;

“Though your lancet has pierced men’s hearts,
None has perceived you as you truly are;
Your melody springs from a poet’s song,
But what you utter transcends poesy.”