Influence Of The Mathnavi On Muslim Thought In South Asia

Influence Of The Mathnavi On Muslim Thought In South Asia

Below text is the speech delivered by Dr. Javed Iqbal, son of Dr. Muhammad Iqbal at Seljuk University Konya for the Second International Mevlana Rumi Congress. It is in public domain and reproduced from a manuscript preserved by Iqbal Academy Lahore.

The Mathnavi of Mevlana Rumi reached the Indian Sub-continent around the Twelfth Century AD through the Sufis of the Suhrawardiyah and
Qadiriyah orders. The Sufis of these orders were very active in winning converts to Islam during the period commencing from the reign of Sultan Alauddin Khilji and extending up to the times of Sultan Muhammad Tughlaq. (Eleventh and Twelfth Centuries). Their method of preaching was unique, because, according to their creed, the ultimate aim of Islam was to realize the ideal of human unity. One eminent Sufi of the Suhrawardiyah order, namely Sheikh Bahauddin Zikariya of Multan was a contemporary of Mevlana and was very much influenced by his teachings.

From the period of Sultan Muhammad Tughlaq down to the reign of the Mughal Emperor Akbar, (Thirteenth to Sixteenth Centuries), Islamic
Sufiism suffered a decline due to the influence of Buddhist and Vedantic ideas. But some Sufi orders tried to revive Islamic Sufiism by seeking
guidance from the Mathnavi. They encouraged the development of literature and poetry, and took pains to disseminate a correct understanding of Islam imbued with a spirit of religious tolerance.

These preachers and reformers, inspired by the Mathnavi, emphasized particularly the ethical values of Islam and devoted themselves entirely to the character building of the people. The ideas of Sheikh Ahmad of Sirhind (also known as Mujaddid’Alaf-i-Thani), the great Sufi sage of Shahudi school, were based on some basic concepts of Mevlana. It was due to him that the Shahudi approach to Tauhid as opposed to the Wajudi approach became popular amongst the Muslims of the Sub-continent, and this distinguished hem from other religious communities. Furthermore, eminent scholars and Sufis, like Khwaja Baqi Billah, Sheikh Muhaddis Dehlavi and their colleagues
rendered outstanding services in the evolution of an Islamic educational system. Their efforts resulted in the preparation of a separate and distinct curriculum for Muslim children.

From the Seventeenth to Twentieth Centuries, one can easily trace theinfluence of the Mathnavi in the writings of scholars like Shah Waliullah, Syed Ahmad Barailvi and Shah Ismail Shaheed. Their disciples, such as Shah Rafiq, Shah Muhammad Ishaq, Mufti Sadaruddin, Shah Ghulam Ali, Mufti Ilahi Bakhsh, Mevlana Fazal Haq Khairabadi and others further developed their ideas. Thereafter the teachings of Syed Ahmad Khan, poetry of Altaf Hussain Hali and writings of Shibli and others belonging to the Aligarh school of thought are also founded on the Mathnavi. On the other hand, the history of Muslim educational system in the Sub-continent reveals that throughout the centuries it has been dominated by the Mathnavi. Thus it would not be wrong to say that the ideas found in the Mathnavi eventually led to modern Islamic resurgence in the Sub-continent.

Muhammad Iqbal, the dreamer of a separate Muslim State in the Subcontinent, and the spiritual father of Pakistan was evidently inspired by the teachings of Mevlana. Like any Muslim of this century who wants to retain faith in Islam, and at the same time to accept modernity, Iqbal raises certain questions which agitate his mind. These questions are addressed to Mevlana and the answers have been drawn from the verses of the Mathnavi.

This famous long Urdu poem by Iqbal is titled “Sage Rumi and Indian Disciple [Peer Rumi, Mureed Hindi]“ The poem consists of an interesting dialogue between Iqbal and Rumi and indicates that, even today, the Mathnavi can provide solutions to all the problems faced by modern Muslims. Some extracts are as follows: 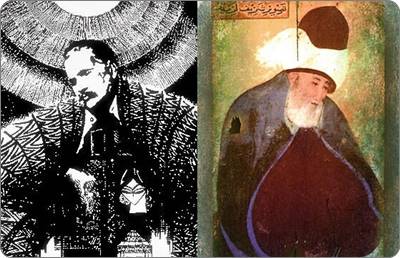 Indian Disciple: A stream of blood flows from the Seeing Eye because at the hands of modern knowledge Religion is tattered and
torn. Flows can this he remedied?

Sage Rumi: Knowledge used exclusively for material gain bites you like a serpent. But as a purifier of the inner self, it becomes your best
friend.

Indian Disciple: O leader of sensitive lovers! I remember the exalted dictum embodied in your verse: Mind, strings and frame of the instrument are dry, yet wherefrom emerges the song which reminds one of the Beloved?”

(The modern age is intoxicated by the song, but it does not derive any pleasure as it is transitory, uncertain and unaware of the joy of
presence before the Beloved. Thus how can it know the secret as to who is the Beloved and wherefrom emerges the song, Alas! Despite
the light of Arts and Sciences in Europe, the song is plunged into the abyss of darkness instead of being elevated to the heavens.)

Sage Rumi: Everyone is not capable of enjoying the song. Figs are a fruit which are not relished by all birds.

Indian Disciple: I have absorbed the philosophies of the East and the West. Yet my soul remains troubled and agitated with aches and
pains.

Sage Rumi: Incompetent healers have made you ill. Consult a physician who takes motherly care of you.

Indian Disciple: Alas! The Young man who gets university education has been hunted down by the European wizard.

Sage Rumi: A chick which has not grown its own wings is bound to be torn to pieces by the cat if it attempts to fly.

Indian Disciple: How long will the tight between Religion and Fatherland continues? Should the body be preferred to the soul?

Sage Rumi: At night a counterfeit coin gives the appearance of gold. Therefore gold must await the light of day to reveal its authenticity.

Indian Disciple: Tell me what is the reality of Man? I am only a speck of dust; transform me into a moon or a sun.

Sage Rumi: Outwardly man is so insignificant that even a mosquito can make his life miserable. But inwardly he has the potential to
dominate the seven heavens.

Indian Disciple: The brightness of your thought can illuminate the dust. Tell me whether the object of man is to seek Reality through
perception or through vision?

Sage Rumi: Man in substance is vision whereas the rest of him is only crust, and vision means enlightenment of the eye with the beauty
of the Beloved.

Indian Disciple: The East is alive due to the warmth of your songs. Tell me what causes nations to perish?

Sage Rumi: Nations perish when they mistake pebbles for perfume.

Indian Disciple: Why is the Muslim of today devoid of spiritual and material power? How has his blood turned cold?

Sage Rumi: God does not disgrace any community until they hurt His chosen few by rejecting the offered truth and accepting falsehood.

Indian Disciple: How can an honest man benefit in the deserted market-place of existence?

Sage Rumi: He should sell “wisdom” and buy “wonder”, as wisdom is only speculation whereas wonder is vision.

Indian Disciple: O exalted sharer of the intoxication of the eminent Companions (of the Holy Prophet) in the expedition of Badr!Resolve the problem of freewill and determinism for me.

Indian Disciple: What is the ultimate aim of the Religion of the Holy Prophet? Does it preach striving for the ruler ship of the world or its
renunciation?

Sage Rumi: Islam teaches me to strive to gain power, whereas Christianity teaches man to renounce the world and find refuge in the
caves of the mountains.

Indian Disciple: How can baser instincts are controlled? How can the heart be awakened in the breast?

Sage Rumi: Be truly a man of God and tread on earth like a horse, obeying the commands of your Rider, and be not like a corpse that is
a burden on the necks of others.

Indian Disciple: You know the, secrets of the universe. Tell me how can the lives of nation gain strength?

Sage Rumi: if you are a seed, the birds will peck at you and if you are a bud, children will tear you apart. So hide the seed and spread out
like a net. Conceal the bud and adopt the form of slimy grass on the roof.

Indian Disciple: You say one should search for the heart and must always strive for its possession. But my heart is in my breast, and my
essence is thus reflected in my mirror.

Sage Rumi: You claim you have a heart, but the heart’s abode is the highest heaven, and not the depth and degradation of a lump of flesh
beating in your breast. You misunderstood me by considering your heart as the heart. What I mean is one should constantly search for
men of heart, and this search you have given up.

Indian Disciple: How can one master knowledge and science? How does one acquire love and longing for the Beloved?

Indian Disciple: Society demands that one should live in the company of others. But without seclusion fire cannot be instilled in
poetry.

Sage Rumi: Seclusion is required from strangers and not from those who are your own. A fur coat is worn in winter and not in spring.

Indian Disciple: In India there remains neither light nor longing for the Beloved. The men of heart in this country lead a miserable life.

Sage Rumi: Real men are never tired of disseminating light of Faith and warmth of Love. Those who spend their lives in spreading deceit
and shamelessness are the mean ones.

The Muslims of the Sub-continent passed through an identity crisis after the decline of their political power. The subsequent Islamic revival was followed by a cultural renaissance. If one were to attempt to trace the philosophical or ideological basis of Muslim nationalism in South Asia, the conclusion would be that Muslims had rejected pantheistic Wajudi, Sufiism based on the dictum: All is God”, for their survival as a community, and instead adhered to the principle that “All is from God,” This purer form of Islamic Sufiism is the crux of the teachings of Mevlana Rumi. Hence it will not be wrong to say that since Pakistan is the creation of Muslim nationalism; its roots are in Konya even though it is geographically situated in South Asia.