Hazrat Nizamuddin Auliya also known by the titles of ‘Mahbub-i-llahi’, the beloved of God, and “Sultan ul Aulia” or King of Saints, is one of the prominent saints of Islam.

He was born in Badaun in India in 1236 AD. His father died when he was a child of five. At an early age he became a disciple of Baba Farid Gan] Shakkar of Pakpattan. On the death of Baba Farid, Nizamuddin became his successor as a Chisti saint. In due course he rose to prominence as a great saint.

Alauddin Khilji the emperor of India was devoted to the saint but the saint refused to have any dealings with the court. When the emperor sent him a message that he would be coming to see him the saint said “There are two doors of my house. If you come by one door, I will go out by the other”.

Later Mubarik Khilji wanted that the saint should attend his court, but Nizam-ud-Din refused to wait on the King. The emperor issued orders that unless the saint attended the court on the appearance of the new moon, he would be brought to the court by force. On the day the order was to be enforced, the emperor was murdered.

After the Khiljis, Ghiasuddin Tughluk came to the throne. The saint refused to have any dealings with the new King as well. Ghiasuddin went to Bengal, and when he was returning to Delhij he sent an order that before he reached Delhi, the saint should quit the city. On receiving the royal command the saint said “Hunnuz Delhi Dur Ust” (Delhi is still far off). Before the emperor could reach Delhi, he met unexpected death at Tughlakabad a few miles from Delhi,

The saint died in 1327 AD at the age of 91. His mausoleum at Delhi is one of the most sacred shrines of the indo-Pakistan sub-continent.

Iqbal had great regard for the saint. In 1905 while on the way to England for higher studies, Iqbal visited the shrine of the saint at Delhi, and addressed a poem to the saint entitled “The Plea of a Traveller”:

“The angels take your name with great respect,

You hold a high station; you command great bounties,

The stars of Love move in their orbits because of your attraction Your spiritual order Has the dimensions of the solar system;

A visit to your shrine gives new life to the heart.

Your status is indeed higher than that of iesus or Khizr.

You are indeed the Beloved of God.

You are superb and splendid; you command great honour, if I am a sinner, I have the consolation that I am your slave,

If there is any good in me that I owe to you.

Like the fragrance of a flower I am leaving the garden of my home­land,

My power of patience is going to be put to test.

The urge for Knowledge is taking me away from my home, t am a tree of the desert depending on the cloud and independent of the gardener,

I pray that with your bleassings I may shine like the sun.

May I be ahead of my fellow travellers;

That the caravan may regard me their destination.

May my pen never hurt any one; may I have no complaint against any one,

May I be blessed wit,h such power of expression That impresses and moves the hearts.

May I return to place my forehead again at the feet of my parents. From whom I have learnt the secrets of Love

May God protect my teacher, whose house is sacred to me

The man whose teachings evoked new urges in me And made me aware of great secrets,

I pray that may God of earth and heaven confer on me The pleasure to see him again.

And my brother, my Joseph the Second, the embodiment of brotherly love

To whom I owe an everlasting love of gratitude

Whose affection knows no I and Thou

And because of whom I have grown up in luxury

May he bloom in the world like a flower

Indeed I hold him dearer than my own life

May the bud of the heart blossom into flower.** 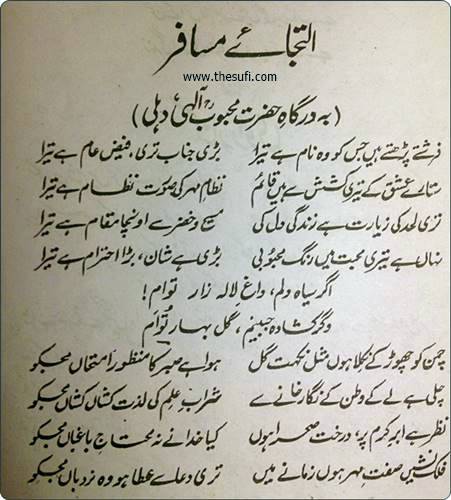 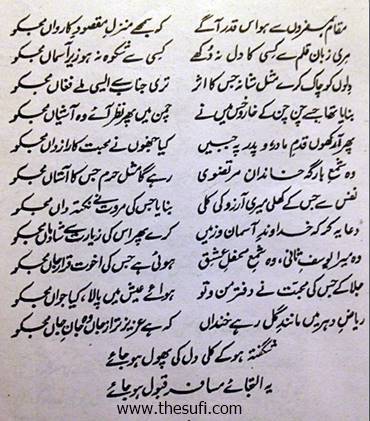