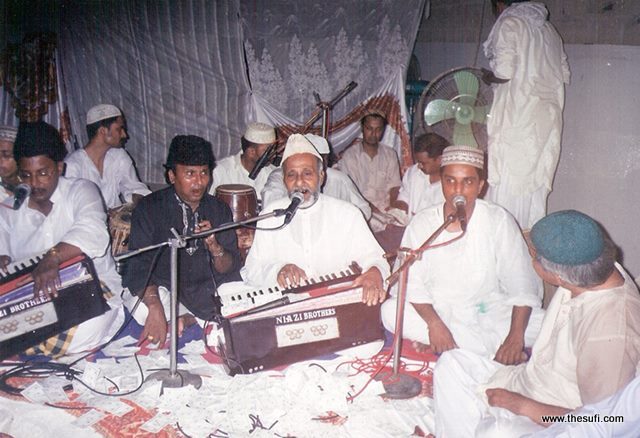 The first three beautiful qawwalis come from an LP that was released by in 1976, with the title “Ya Badi‘ al-Jamal”. On this album, Ustad Manzoor Niazi sings together with his cousin, Ustad Munshi Raziuddin.

The qawwalis are in Arabic and Urdu. These are the titles:

Then I send you some qawwalis by Ustad Bahauddin Khan. The first two are “qalbanas”:

This is a very old qawwali, entirely in Arabic. It is a “qalbana”. I have never found a satisfactory definition of a “qalbana”. All I’ve been able to find is that it is one of the various forms of qawwali that were introduced by Hazrat Amir Khusrau (R.A.).

Since the text is in Arabic, I’ve transcribed its words the way I learnt it at university. Pakistani and Indian qawwals pronounce the words rather differently, but I’m confident that you’ll have no trouble to follow the transcription.

Glory be to the One to whom belong Power, Greatness, Awe-Inspiring Dignity and Grandeur

The One to whom belong Majesty, Beauty and Perfection [2] and the Realm of Divine Power

Glory be to the King who is Present [i.e. Omnipresent – He is everywhere and in all things and beings; no other is Present but He]

Glory be to the Ever-Living King Who never sleeps, never dies and never ends

[1] See the text on the below about “Mulk, Malakūt and Jabarūt”.

[4] Al-Hayy (Hayyun, without the definite article and with the nominative case ending) means “the Living”, “the Ever-Living”. It is often combined with the name al-Qayyūm, a Divine name that means “the Self-Subsisting” or “the Self-Existing One Who is the foundation upon which all things exist.”

[5] These seemingly abstract and meaningless syllables are also sung in the Tarāna genre, created by Hazrat Amir Khusrau (R.A.). Certain Sufi mystics have said that the syllables of a Tarāna do have meaning; the famous Indian classical vocalist Ustad Amir Khan (1912-1974), who was very familiar with Sufism, said the same. See http://qaul.blogspot.be/2008/05/tarana-singing-ustad-amir-khan.html if you want to read more about it.

The corporeal, observable universe that we understand as “here” and “the cosmos”.

The spiritual and intellectual realm.

The spiritual/intellectual realm where the souls/intellects and all the spiritual faculties reside.

Mulk and Malakūt are two aspects of Jabarūt. Jabarūt is the seed and the root of all realms. Also see the picture about Mulk, Malakūt and Jabarūt; one picture often says more than a thousand words!

This qalbana in another one of Hazrat Amir Khusrau’s creations. It was sung live, and Ustad Bahauddin Khan Sahib first gives a brief introduction in English.

The first part of this qalbana, which is in Arabic, is linked to a hadīth:

It was narrated that ‘Aisha (R.A.) said:

“When the Messenger of Allah (S.A.W.S) said the Salām, he would sit only for as long as it took to say: ‘Allāhumma, Anta s-Salām wa Minka s-salām. Tabārakta, yā Dhā l-Jalāli wa l-Ikrām. (O Allāh, You are As-Salām [Perfect Peace], from You is all peace, You are full of Blessing, O Possessor of Majesty and Honour).’”

The second part is in what I assume to be Hindevi (or Hindavi), the form of Hindustani spoken in the Delhi area in Hazrat Amir Khusrau’s time, and the precursor of Urdu (correct me if I’m wrong, because Hazrat Amir Khusrau (R.A.) also wrote in Braj Bhasha).

In conclusion I send you two digitalised Pakistani audio tapes. The first is is called “Ya Habibi, Ya Muhammad” “O my Beloved, O Muhammad” and for the most part consists of Urdu Na‘ts. I don’t know when this tape was released, but it must have been a few decades ago, since you can still hear the voice of Ustad Qutbuddin Khan, Ustad Bahaduddin Khan’s brother.

The second digitalised tape, simply entitled “Bahauddin Qawal”, is less old. It contains a number of traditional qawwalis, some of them by Hazrat Amir Khusrau.

Dear Brother, I hope that all these qawwalis will move your kind heart!