How Can We Prepare Ourselves In This World For Heaven?

How Can We Prepare Ourselves In this World For Heaven? Question to Shaykh Nazim Haqqani

Just like a small child, its father or mother takes the child’s hand and teaches them one step at a time. In the same way, Prophets teach how we may reach to the heavens. Then, if you have learned the first step well, you may put your foot forward, take a second step, third step and so on without any obstacle for you to reach up higher and higher.

Yes! Anyone who has never seen a jet plane flying will say, “That cannot happen, how can a large vessel of metal with hundreds of people inside going to lift off and fly like a bird?”

They would accuse you of being a liar and fool. “How can metal float and fly?”

The plane is sitting on the runway, quietly sitting and hearing what the sceptics are saying. It is listening and smiling; and if it could speak, it would be telling everyone to get in and experience for themselves how it gets up, and inviting people to get in or watch from outside. Then the captain enters, presses one button and slowly, slowly the turbines turn and the sceptics are still saying,

“What is going to happen?”

“Perhaps this giant hunk of metal can move like a car, but still we are never going to believe that it will leave the ground.”

After taxing, it finally moves onto the runway, the captain applies full power, and vrrrrrrrrr, off they go. The skeptics all say,

Yes. For everyone there are limits for understanding according to their individual capabilities and knowledge. One person’s limit is not the same as another’s. Our limits of understanding and knowledge all vary. You must not force a person to believe this or that — leave them with their own beliefs.

Once upon a time, Prophet Moses went to Mt. Sinai. Along his way, he met a person that was the best saddle maker in the land. Knowing that Moses was going to meet his Lord, he politely requested that Moses convey his highest greetings and praises to God. He said,

“Never am I going to be able to reach God in the way that you do, so please tell Him for me that, if I were to meet Him, I would happily offer to make Him the very best saddle for His horse.”

“Don’t speak of such things. God is not a man riding on a horse. Don’t say anything like this.”

Moses proceeded to Mt. Sinai for his blessed meeting with his Lord. After he had greeted Him, God said,

“O Moses, why are you so angry with my servant? I accept him. He is offering Me his highest praises and the most precious thing that he could offer — he is My servant and he graciously would like to make Me the best saddle he can, as if he thinks I am a god riding on a horse. I accept this. Why then
are you so angry with him? Leave him.”

Subhan Allah (Glory be to God) Almighty. Look at the tolerance God shows for His servants.

Let me relay to you another short story. At the time of the last Prophet, our Master Muhammad, may God’s peace and blessing be upon him, a person made an oath, which he then broke. As a reprisal for having broken his oath, he was obliged to set free one captive. Conditional on him was that
this captive be a maiden and a believer in God. Thus, the Prophet asked her,

“Do you believe in God?”

“Yes I believe,” responded the maiden.

When asked where God is, she pointed up. The Prophet witnessing this concluded that she was a believer in God. The companions of the Prophet objected saying,

“No, O Messenger of God, she is pointing up as if indicating that God is occupying a space. How can she be deemed a believer if saying God takes up space?”

The Prophet replied, “What she means to indicate is the highness of God and not that God is a being with dimensions. The understanding levels of people vary and the knowledge that we possess through our different levels of understanding are going to be in different limits.” 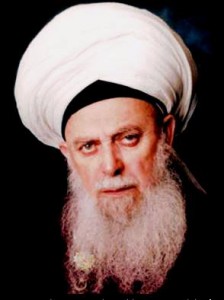