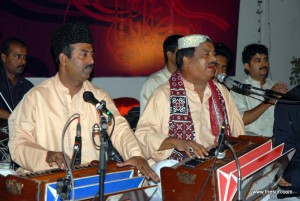 I’ve tried to find information about this song, but all I’ve managed to find is that it is in Punjabi. It must be a song that expresses love, since it contains the word “Mahi”, which means “Beloved”.

This is one of the most celebrated poems of the famous Punjabi mystic Hazrat Baba Bulleh Shah (1680-1757). Here’s an English translation of the lyrics:

Your Love makes me dance in sacred ecstasy

The sun has set yet the glow remains outside,

I’ll give my life for a glimpse of You

Ah! how mindless I am! I didn’t rush to You…

Your Love makes me dance in sacred ecstasy

Amidst our sacred passion, the peacock will be singing (one day)

My search from nothing to all, will reveal my Beloved (one day)

Taking away my heart, You never asked about my state

Bulleh losing his self, became the fragrance of his Master Shah Inayat*

He has given me new life, so became I the face of his Presence only,

This raptured heart has made me a fearless vagabond

Towards the end of the song, Ustad Farid Ayaz inserts a tarāna.

The lyrics of this qawwali were written by Hazrat Bedam Shah Warsi (R.A.), a Saint of the Warsi Sufi Order, who lived from 1876 to 1936 (some sources give other years – let’s just say that he lived in the late 19th and early 20th century).

“Ganj-e-Shakar” means “Treasure of Sugar”. It is the epithet of the Chishti Sufi Saint Hazrat Khwaja Fariduddin Mas‘ood Chishti, or “Hazrat Baba Farid” for short. Hazrat Baba Farid (R.A.) lived from ca. 1173 to 1266 CE. He was the third head of the Chishti Sufi Order in the Indian subcontinent, having succeeded Hazrat Khwaja Qutbuddin Bakhtiyar Kaki Chishti (1173-1128 CE), whose dargah or mausoleum is in Mehrauli (a part of Delhi).

Although Hazrat Baba Farid is the third Master of the Chishti Sufi Order, a separate offshoot came into existence: the Chishti Faridi Silsila. The same would happen to his two most important disciples: Hazrat Khwaja Nizamuddin Auliya of Delhi (1238-1325 CE) and Hazrat Khwaja Makdoom Alauddin Ali Ahmad Sabir of Kaliyar Sharif, India (1188–1280 CE). With Hazrat Nizamuddin Auliya began the Chishti Nizami Silsila and with Hazrat Alauddin Sabir began the Chishti Sab(i)ri Silsila. The illustrious Sabri Brothers belonged to this particular lineage. It is important to stress that these offshoots were not the result of conflicts within the Chishti Sufi Order. They should be regarded as “branches on the trunk of the central Chishti tree”.

The real explanation of the epithet may be derived from the blessing which he is recorded to have received from his Master, Hazrat Khwaja Qutbuddin Bakhtiyar Kaki Chishti (R.A.), who praised the sweetness of his nature, and remarked: “You shall be sweet like sugar”.

Hazrat Baba Farid was born in Punjab. He settled in Ajodhan, Punjab, which is now called “Pāk Pattan”;. Hazrat Baba Farid’s dargah also is in Pāk Pattan or Pākpattan (in present-day Pakistan), close to the banks of the river Sutlej. Pākpattan, which means “Holy Ferry” or “Ferry of the Pure”, owes its name to the popularity and sanctity of Hazrat Baba Farid.

Hazrat Baba Farid was the first to write poetry in Punjabi. Many of his verses were included in the Adi Granth, the predecessor of the Guru Granth Sahib, the sacred scripture of the Sikh religion. He shares this honour with Bhagat Kabir (see Volume 1 of “Sufi Eternal”).

Here’s an English translation of the song:

Khwaja Moinuddin, Khwaja Qutbuddin dyed it in the colours of Love

Come with colour and spray to play Hori*** in my courtyard

O God! There is fortune in the fate of him who has obtained the adorable Beloved!

* Pronounced “Nijamodin”. As I wrote earlier, in many forms of Hindi “z” often changes into “j”. This is also the case here.

** The Chishti Sufi Order is named after the city of Chisht, which lies in the West of modern-day Afghanistan. In Persian it’s pronounced Chesht. The first Sufi Master to have called himself “Cheshti” or “Chishti” was Hazrat Khwaja Abu Ishaq Shami (R.A.), who had travelled to Chesht from his native Damascus (Shām in Arabic). He died in 940 CE, after having established theCheshti or Chishti Sufi Order in Chesht. From there it would spread to the Indian subcontinent and become its most important Sufi Order.

**** This qawwali is written from the perspective of a young woman who is about to become a bride. The marriage is a symbol for mystical union.

This qawwali was written by Hazrat Amir Khusrau (R.A.). It is unique in that the first line of each couplet is in Persian and the second in Braj Bhasha (a Western variety of Hindi). The theme of the poem is separation from the (mystical) Beloved:

“Do not overlook my misery

Blandishing your eyes, and weaving tales

My patience has over-brimmed, O Sweetheart,

Why do you not take me to your bosom?

The day of our union is short like life

When I do not get to see my Beloved Friend,

How am I to pass the dark nights?

Suddenly, as if the heart, by two enchanting eyes

Is beset by a thousand deceptions and robbed of tranquillity

But who cares enough to go and report

To my Darling my state of affairs?

The lamp is aflame; every atom excited

I roam, always, afire with love

Neither sleep to my eyes, nor peace for my body,

Neither comes himself, nor sends any messages

In honour of the day of union with the Beloved

Who has lured me so long, O Khusrau

I shall keep my heart suppressed,

If ever I get a chance to get to his place”

This is a translation of the first one, “Mohe Apne Hi Rang Mein De”:

“Dye me in your hue, Nijam

You are my Lord and Master, O Beloved of God*

Dye me in your hue**

My scarf, and the Beloved’s turban,

Both need to be dyed in the hue of Spring

Whatever be the price for dyeing, ask for it,

You can have my blossoming youth in mortgage

Dye me in your hue

I have come and have fallen at your doorstep,

For you to safeguard my pride, my dignity,

You are my Lord and Master, O Beloved of God

Dye me in your hue”

** As I explained in an earlier post, “dye” “hue” or “colour” have a special meaning in this context: when “dye”, “hue” or “colour” are mentioned, a special quality of a Sufi Master or Saint is meant: “rang”. This word literally means “colour”, “dye” or “hue”, but there’s much more to it. “Rang” can only be described. I describe it as “the Glow of the Inner Essence of the Master”. I don’t know a better way to describe it.

Everyone dresses up, the Twenty Two Saints have come**

So let us play dhamal

Give respect to our exalted Messenger

We celebrate spring for you, O Arab Friend

Keep the colourful spirit alive for ever

* “Dhamāl” is a Sufi dance, usually performed to the rhythms of loud drums. The aim of dhamālis to reach mystical ecstasy. The origin of dancing dhamāl predates the advent of Sufism in the Indian subcontinent: it used to be performed at special occasions, such as Basant (the celebration of the arrival of Spring). The Sufis adopted this dance. Not all Sufis dance dhamāl; it is mainly practised by qalandars and devotees of qalandar Saints, such as the hugely popular Hazrat La‘l Shahbāz Qalandar (d. 1274 CE – R.A.), whose dargah in Sehwan Sharif in Sindh, Pakistan, attracts many thousands of pilgrims every year.

** “Twenty Two Saints” or “Twenty Two Khwajas”: Delhi is known as “Baees Khwaja ki Chaukhat”, “the Threshold of the Twenty Two Saints”. There is a belief that the Prophet Muhammad (S.A.W.S.) gifted some of his personal possessions, including his cloak and a prayer carpet, to the elders of the Chishti Sufi Order. The Chishti Sufis draw their spiritual lineage (“Silsila”) from the Sufi Saint Hazrat Hasan of Basra (642-728 CE – R.A.), who was initiated by the Prophet’s son-in-law, Hazrat Ali (may God be pleased with him). These sacred relics came to the Indian subcontinent with Hazrat Khwaja Moiunuddin Chishti, and were entrusted to his successor, Hazrat Khwaja Qutbuddin Bakhtiyar Kaki Chishti, who passed them on to Hazrat Khwaja Fariduddin Chishti. They arrived in Delhi with Hazrat Khwaja Fariduddin’s disciple, Hazrat Khwaja Nizamuddin Auliya, who handed them over to Hazrat Khwaja Nasiruddin Cheragh-e-Dehlevi. The latter willed that the relics be entombed with him. The spiritual chain from Hazrat Khwaja Nasiruddin to the Prophet Muhammad remains an unbroken Silsila of 22 Khwajas, and Delhi became their threshold. [Based on Sufism: Heart of Islam, published in 2013. The author, Sadia Dehlvi, is a well-known columnist who writes for several leading publications of the Indian subcontinent.]

The final qawwali, the Rang, has already been treated in one of my earlier posts, so I end my comments for the second volume of “Sufi Eternal” here. I hope that my writings may be useful to all who visit TheSufi.com.

Wishing you all the very best,