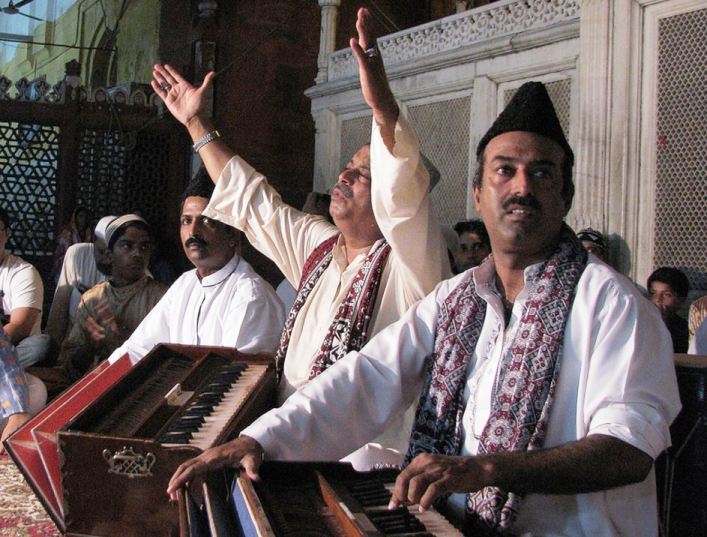 Today the main custodians and representatives of the Qawwal Bachchon ka Gharana are Ustad Farid Ayaz and his brother Ustad Abu Muhammad. They are the sons of the renowned Ustad Munshi Raziuddin Ahmad Khan Qawwal (1912-2003). Ustad Munshi Raziuddin was not only a qawwal, he also was a formidable classical musician. He trained his sons in both traditions, and it must be said: Ustad Farid Ayaz and Ustad Abu Muhammad are outstanding qawwals, worthy successors to their father. Especially Ustad Farid Ayaz is an sublime and exceptionally gifted singer.

Ustad Ayaz and Ustad Abu Muhammad Qawwal regularly perform at the All Pakistan Music Conference (APMC), an annual music festival which is held in Lahore; both established Pakistani masters of music and young and upcoming talented singers and musicians take part in this festival.

I have recordings of a performance by Ustad Farid Ayaz and Ustad Abu Muhammad Qawwal at the APMC of 2007, which was published as a double CD. To make things easier I’ve numbered the songs of both discs from 1 to 8. Today I’m sending you these recordings. I add a few English translations for some of the qawwalis, as understanding what the lyrics of a qawwali mean enhances the joy of listening to them. Unfortunately I haven’t been able to provide translations for all the qawwalis. For some qawwalis I’ve also written some explanations that I thought might be useful. 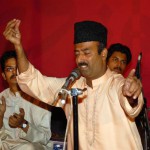 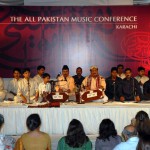 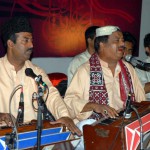 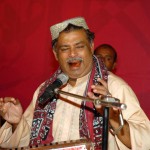 Here are the qawwalis Ustad Farid Ayaz and Ustad Abu Muhammad Qawwal sang at the APMC of 2007:

1) Qaul: Man Kunto Maula. This is a qawwali of major importance. It is the “Qaul and Tarāna” of Hazrat Amir Khusrau (R.A.). “Qaul” (from the Arabic qawl – the term “qawwālī” is derived from this word) means “word”, “speech” or “saying”, more particularly an authoritative saying of a great and holy person. In this case the qaul is a transmitted saying of the Prophet Muhammad (S.A.W.S.) or a hadīth.

About three months before he left this world, the Prophet addressed a large crowd of his followers. This happened at an oasis between Medina and Mecca, where there is a pond named “Ghadīr Khumm” (the word ghadīr means “pond” in Arabic). There, Hazrat Muhammad took Hazrat Ali’s right hand and raised it, saying: “man kuntu mawlāhu, fa-hādhā ‘alīyun mawlāh”. In English this means: “If I have been your Mawla*, then Ali is your Mawla after me”, or: “If you have accepted me as your Mawla*, then Ali is your Mawla* too”. These are not literal translations (a literal tradition wouldn’t sound nice in English), but they convey the meaning of this hadīth correctly.

This hadīth is accepted as true and valid by both Sunni and Shia Muslims. To Sufis it is particularly significant, because it means that Hazrat Muhammad proclaimed Hazrat Ali his most important mystical heir and successor.

“Mawla” or “Maula” can have several of meanings: “Lord”, “Master”, “Holy Friend of God”, “Protector”, “Benefactor”, “Spiritual Liberator” and “Saviour”.

The hadīth which is the theme of this qaul has a version with a slight variation: “man kuntu mawlāhu, fa-‘alīyun mawlāh”. In this version the demonstrative pronoun hādhā (“this”) has been omitted, but this doesn’t change the meaning of the hadīth in any way. Ustad Farid Ayaz and Ustad Abu Muhammad Qawwal sing this particular version.

With great virtuosity and impressive skill they add a lot of extra poetry and vocal embellishments to highlight the core of this qawwali, i.e. the qaul. And of course they also sing the tarāna that completes this fundamental qaul:

As I’ve written before, the Tarāna genre was created by Hazrat Amir Khusrau (R.A.). Many contemporary classical vocalists believe that the syllables of a tarāna are abstract and meaningless. However, certain Sufi mystics have said that the syllables of a tarāna do have meaning; the famous Indian classical vocalist Ustad Amir Khan (1912-1974), who was very familiar with Sufism, said the same. See http://qaul.blogspot.be/2008/05/tarana-singing-ustad-amir-khan.html if you want to read more about it. Hindustani classical vocalists often sing a tarāna to conclude the presentation of a rāga.

Here’s an English translation of this ghazal:

“Tonight came the news that my beloved would arrive soon

May my head be sacrificed to the path on which you come riding!

The attraction of love won’t leave you unmoved;

Should you not come to my funeral, you’ll definitely come to my grave.

Come, so that I may remain alive –

After I am no longer – for what purpose will you come?

By coming once you have stolen the heart, the religion and the patience of Khusrau;

[Imagine] what would happen if you came two or three times!”

Since this is Sufi music, “the Beloved” may be taken to be “the Divine Beloved”, or Hazrat Amir Khusrau’s Master, whom he love above all else: Hazrat* Khwaja Nizamuddin Auliya Chishti (d. 1325 CE).

* “Hazrat” (from the Arabic hadratun) is a title that expresses great reverence. It is often rendered as “His/Her Holiness”, but its literal and original meaning is “Presence”.

3) Sakhi Kase Ka Hoon. This is a song in a form of Hindi, and regrettably I can’t provide a translation.

Here’s an English translation of the lyrics:

“You’ve taken away my looks, my identity, by just a glance [literally: “When our eyes met”]

By making me drink the Wine of Love-potion,

You’ve intoxicated me by just a glance;

My fair, delicate wrists with green bangles in them,

Have been held tightly by you with just a glance

I give my life to you, Oh my cloth-dyer,

You’ve dyed me in yourself, by just a glance

I give my whole life to you Oh, Nijām,

You’ve made me your bride, by just a glance”

A peculiar aspect of many forms of Hindi is that “z” often changes into “j”. This is also the case here: “Nizām” becomes “Nijām”. Note that Hazrat Amir Khusrau (R.A.) has written this poem from the perspective of a young woman who is about to become a bride; in doing so, he emphasises the receptive aspect of the Sufi disciple or murīd.

When “dye” or “colour” is mentioned, a special quality of a Sufi Master or Saint is meant: “rang”. This word literally means “colour”, “dye” or “hue”, but there’s much more to it. “Rang” can only be described. I describe it as “the Glow of the Inner Essence of the Master”. I don’t know a better way to describe it.

This is another qawwali by Hazrat Amir Khusrau, an expression of his boundless love for his Master, Hazrat Khwaja Nizamuddin Auliya (R.A.):

The “n” in “Ga(n)wari” is again between brackets, for the same reason as “Naina(n)”.

Here’s a translation for “Gar Nari Ga(n)wari Chahe So Kahe”:

“Let the housewife say what she will,

I stole a glance from the eyes of Nijaam [= Nizamuddin Auliya]

His darling face and his charming form I have hidden in the depths of my heart.

Let Khusrau perish at the feet of Nijaam, I have just sold him a priceless maid [= Hazrat Amir Khusrau himself]

Khusrau! It is the blissful wedding night; I awake with my love

The body mine, the heart my lover’s -both coloured in the same hue”

This qawwal too is written from the perspective of a young woman who is about to become a bride. The marriage is a symbol for mystical union.

The final piece consists of two qawwalis. The first is a Persian poem by the Sufi Saint Hazrat Sharafuddin Bu Ali Shah Qalandar of Panipat (1209-1324 CE). His mausoleum or dargah is in Panipat, about 90 km north of New Delhi, is a place of pilgrimage.

Ustad Farid Ayaz introduces the song by reciting a few verses in Persian: “Say O Ali!, O heart, for this is the highest support! Sacrifice your life and soul at his feet – this the Way of Loyalty!”. This illustrates the importance the Sufis attach to Hazrat Maula Ali (R.A.). Hazrat Ali is regarded as the Perfect Sufi, the Perfect Master and the Spiritually Perfect Man. (Insān-e-Kāmil).

“I belong to Haidar, I am an intoxicated qalandar

I am the slave of Ali, the Chosen One [Murtaza = “Chosen by God because he is pleasing to God”]

I am the leader of all mystical drunkards [i.e. drunk with Divine Wine],

Tradition has it that Haidar, one of the names of Hazrat Ali, is derived from the Arabic word Hayy, meaning “Life” or “Living One”. Hayy is also one of the 99 Beautiful Names of God. However, in some Persian poetry it takes on the meaning of “dragon”. “Dar” is derived from the Persian verb darīdan, meaning “to tear up”, “to rip apart”. According to a traditional symbolical story, as a baby, Hazrat Ali tore a dragon to pieces from his cradle (the cradle is a symbol of innocence and purity; the dragon is a symbol for the lower, untrue ego – the nafs). Therefore “Haidar” might be translated as “Dragon Slayer”. Often Haidar is also rendered as “the Lion of God”, suggesting Hazrat Ali’s perfect and exceptional courage and strength. According to another version of this Persian traditional story, Hazrat Ali gripped the dragon’s mouth and held it tightly shut, to prevent later mystical seekers from walking into it.

Haidar is often combined with the word karrār. Haidar-e-Karrār means “The Lion of God or God’s Brave Warrior, who, when he is pushed back in battle, keeps coming back and continues to fight until the battle is won”. This refers to the inner battle against the nafs – a Sufi has to fight within himself over and over again.

Qalandars are wandering dervishes, who disregard social and religious conventions. Qalandars constantly strive for mystical intoxication (“mastī”). Some of them are highly accomplished mystics.

Finally, Ustad Farid Ayaz and Ustad Abu Muhammad Qawwal sing Hazrat Amir Khusrau’s “Rang”. For an interpretation of this word, see the notes for qawwali number 6. The “Rang” is said to have originated when Hazrat Amir Khusrau, after a very long and fruitless search, had found his true Master – Hazrat Nizamuddin Auliya (R.A.) – and told this to his mother, in a state of rapture.

See the Glow in my courtyard [i.e. “in his innermost being”, “in his heart”]!

I have found my Pīr, Nijamuddin Auliya! [“Pīr” is the Persian word for “Sufi Master”]

I roamed around the entire world, looking for an Ideal Beloved;

And finally this Face has enchanted my heart

The whole world has been opened for me,

Whenever I see now, he is with me,

Oh Beloved, please dye me in yourself [i.e. “in your own Glow/Colour”]

Dye me in the Colour of Spring, Beloved!

Hazrat Amir Khusrau’s “Rang” is usually sung at the end of a qawwali session.

Dear Brother, for now I have nothing more to add. I hope you’ll publish this brilliant music and my writings. In all humility I pray that they may benefit the many people who visit TheSufi.com.